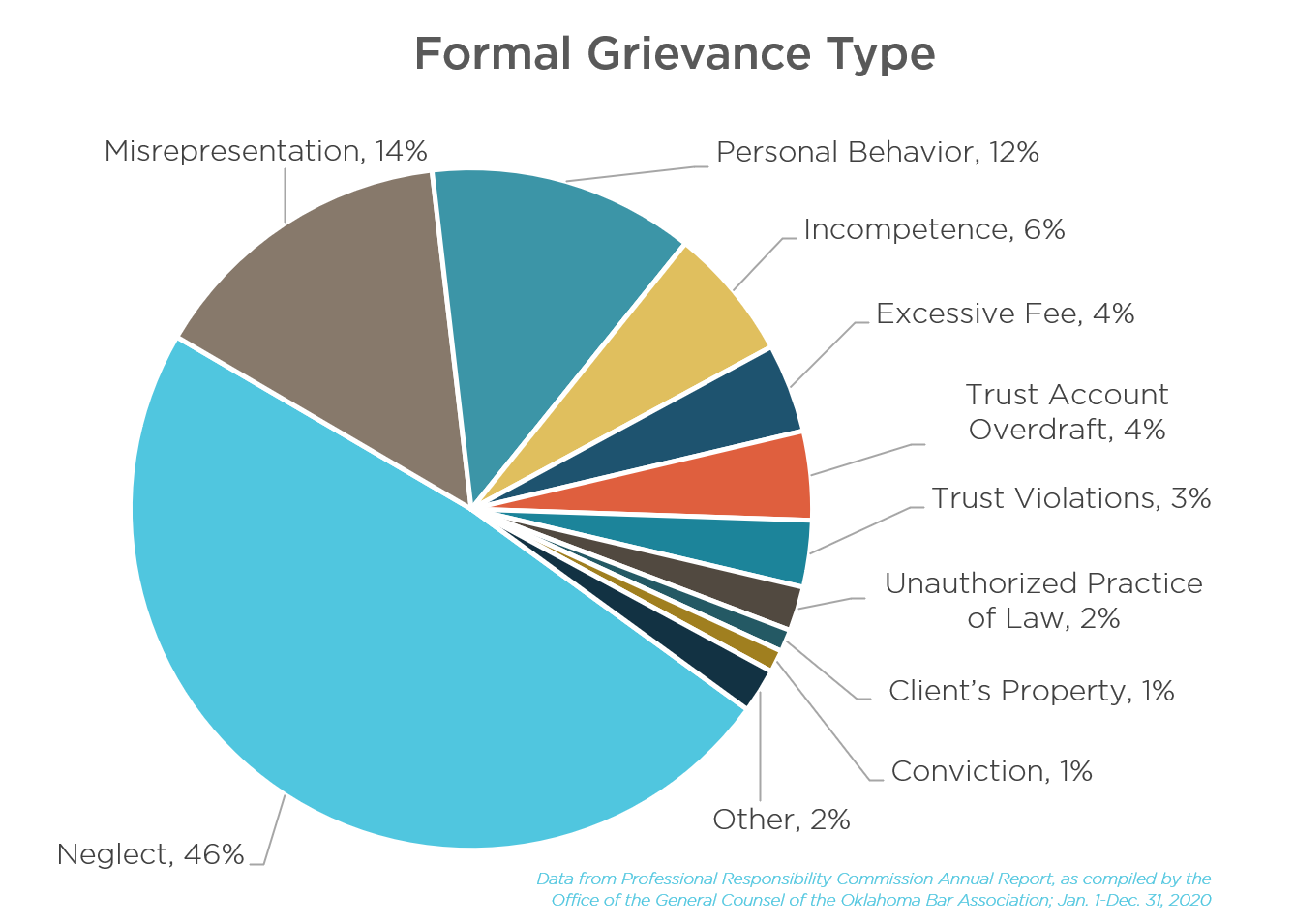 The Oklahoma Bar Association publishes Professional Responsibility Commission Annual Report (PDF). It includes disciplinary actions taken by the commission as well as grievances filed by members of the public. As interesting as the first one is, we’ll be exploring the latter.

Although a claim of malpractice is very different than a bar grievance, and one doesn’t always correlate to the other, they do share some important traits. First, an unhappy client doesn’t necessarily mean you did anything wrong. However, the same way the OBA Office of the General Counsel investigates every formal complaint, every malpractice claim comes with some level of defense. Second, the most common types of each can be a result of preventable errors. We’ve shared a lot of risk management tips to avoid claims, but several of those can also be useful in helping avoid bar complaints.

As shown in the image above, according to this year’s report, formal grievances opened in 2020 were, in order of frequency:

Ways to avoid some complaints above are pretty obvious, like conviction of a lawyer or unauthorized practice of law. The other categories largely come down to a few root causes: managing expectations and client communications, staying organized, and knowing your own limits.

Manage Expectations & Client Communications
Although there are genuine cases of client or matter neglect, a client’s perception of neglect, or even excessive fees and other issues above, can sometimes be a direct result of simple miscommunication. One way to minimize client frustration in this area is to manage expectations from the start. Set clear boundaries as to when and how quickly you will respond to your client and when you expect to hear back from them. You’ll also want to use an engagement letter to clearly lay out the details of engagement, including fee structure, scope of services and length of engagement. For more, see Avert Controversies With an Engagement Letter. You can also avoid billing frustrations, for both you and your client, by billing regularly throughout the process instead of one big bill at the end – and this too should be included in your initially communication.

Stay Organized
Much like calendaring issues (which account for about 30% of all malpractice claims every year, both in Oklahoma and nationally), trust account overdraft and some of the other issues above can be a result of honest mistakes – but those mistakes can often stem from a lack of organization. Using a practice management software like CLIO can help keep track of dates, billing and other case management.

Know Your Limits
Although somewhat related to staying organized, you should also know your own limits with regard to time, stress and mental health. “Lawyer” is regularly cited as the second-most stressful profession, barely trailing “physician.” Is taking on “just one more case” worth the added strain on your time and mental health? There are a finite number of hours in each day, and even fewer in a workday, so learning to use them efficiently and effectively is important.

Another part of this, however, is knowing limits of your legal knowledge. Grievances like “incompetence” sound harsh, but could be a result of what’s often called “dabbling.” You’re a lawyer, so no one has to tell you the law can be complicated. If a family law practitioner primarily handles adoptions, it’s a hard shift to handle an oil and gas matter. Though those kinds of odd pairings can happen, it’s not very common and not recommended unless you are very familiar with those practice areas in which the matters fall.

By a large (actually, huge) margin, Oklahoma lawyers are doing a great job. The report states there were only 228 formal grievances made against 176 attorneys total for the year. Given there are nearly 18,000 Oklahoma bar members, that’s less than 1%. Also, the number of lawyers against whom the commission votes to file formal disciplinary charges is very small – usually less than two dozen, and some years even less than 10. Still, taking precautionary steps and knowing the most common complaints may help you avoid them.

Estate, trust and probate law is an area of practice concerned with the management and transfer of wealth. This...

Practical Tips to Improve Efficiency at Your Law Office

Solo lawyers run their own show and wear many hats, while also facing several challenges. But of all the...

Phil's Corner is a special column from OAMIC's President & CEO Phil Fraim that is sent in our e-newsletter...